This BSN True Mass Weight Gainer Review goes out to all my skinny friends out there, or what we know as in the fitness industry as hardgainers. Individuals who just have a tough time putting on any weight or muscle, no matter how hard they try. All thanks to the blazing quick food burning process in their body known as the metabolism. To help hardgainers in the world alike, the infamous mass gainer was created to add some meat to their bones. How well does True-Mass’ mass gainer work? Is it capable of giving you the gains you’ve dreamed of for so long? Let’s find out.

Bio-Engineered Supplements and Nutrition, or BSN, was founded in 2001 and has established itself as a global leader in the sports nutrition marketplace. The company was created to provide the most unique and effective products scientifically engineered to enhance the physique and athletic performance of anyone. Their dedication to the sports nutrition industry has allowed them to create dynamic, cutting-edge, and result-producing products that are sure to inspire each person to achieve their true potential. 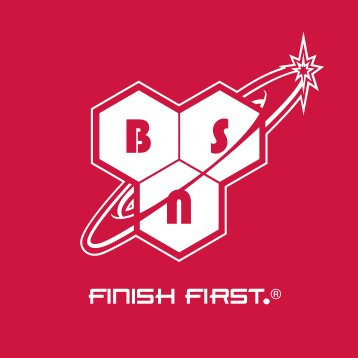 BSN is committed to setting new standards in product development with distribution in over 100 countries worldwide. In the past eight years, they’ve earned 40 consumer-voted supplement awards, more than any brand out there. Their headquarters is located in Miami, Florida, and the head of the whole company is CEO Chris Fergurson and his partner Chris James, two Chris’ run the show. BSN products can be found all over, sold online or at retailers like GNC, Vitamin Shoppe, and Bodybuilding.com.

It’s time to dive into the actual product itself and talk about the positives it contains. As a mass gainer protein powder, I’d expect a couple of things from it, so let’s see some of the good stuff.

As claimed by consumers all around, the taste of this mass gainer is exquisite. There are four possible flavors to choose from, and the rating they each have is pretty high. The fan-favorite out of the bunch is none other than the chocolate milkshake. They are all rated out of ten, and chocolate milkshake excels with a 9.2 rating. If chocolate isn’t your cup of joe, they also got a fantastic strawberry milkshake with a 9.1 rating. 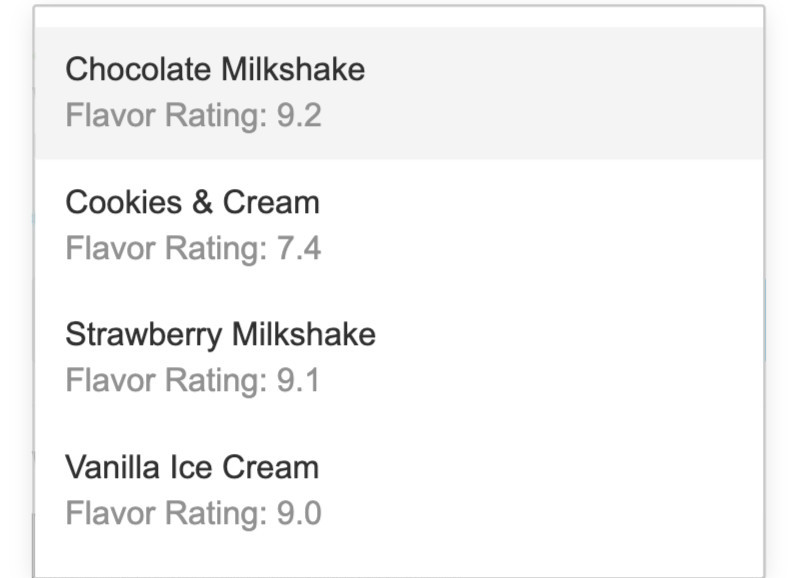 Me personally, I love the chocolatey flavor BSN has got going here. If you’re a long time reader of my site, you’ll know that I’m a chocolate protein powder connoisseur. Their flavor definitely gets my seal of approval. The taste is something that should not be overlooked. If you don’t like the taste of something, you’re not going to come back to it. Many mass gainers have a metallic flavor due to the choice of ingredients as if you were eating pennies. Thankfully, BSN has got you covered with a superb tasting powder.

This sometimes goes without being talked about, but it’s really worth noting. The way something tastes is one thing, but the way it feels in your mouth before digesting it is another thing. Is the powder mushy, thick, or chunky? The one texture we want to avoid is chunky, no one likes a chunky protein powder. Some powders are too difficult to dissolve in water or milk resulting in a clumpy mess in your cup. 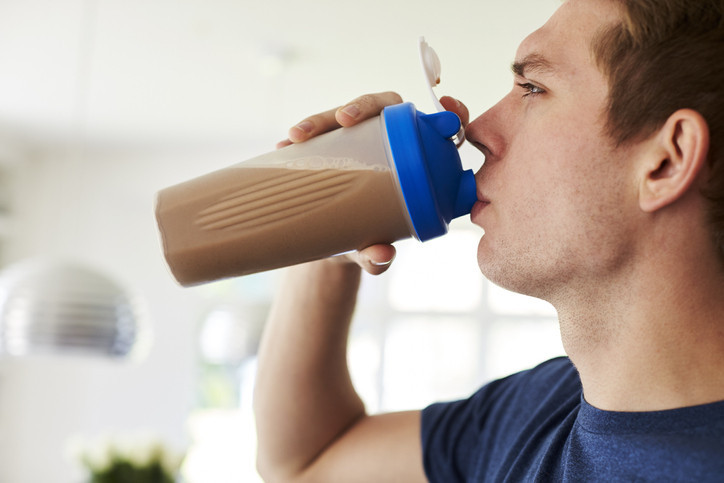 Thankfully, this protein powder passes the clump test for the most part. Lots of protein powders use anti-caking agents, which are controversial, to say the least, that prevent crumpling. Mixing the BSN powder with water or milk with a good shake will dissolve just nicely. Throwing in a wire mixing ball will ensure that not a single clump will be leftover.

I put this at the end of the pros because it could be viewed as both positive or negative. In one serving, so about 3 scoops, there are approximately 700 calories. Compared to competitors like Optimum Nutrition’s Serious Mass gainer, link to a review to it here, it lacks a caloric amount per serving. ON’s mass gainer is 1,270 calories per serving, a serving consisting of only two heaping scoops. The goal of a mass gainer is to add as many calories as you can to your diet, and with only 700 per serving, it seems pretty weak in that category. 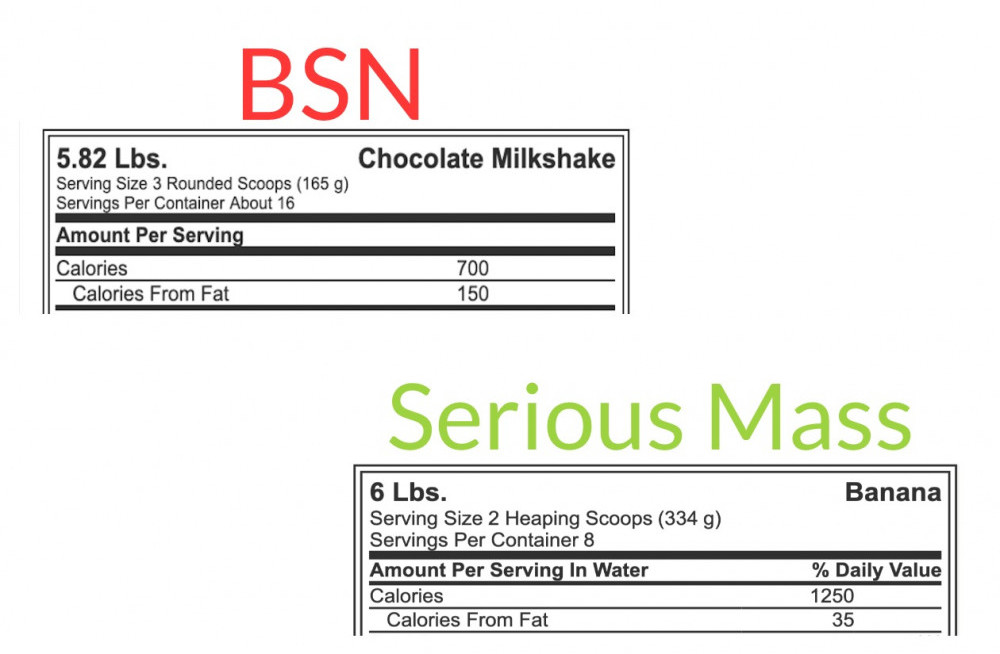 However, the plus side is the fact that BSN does recommend you take 2-3 servings of BSN a day to accumulate more calories. They say it is entirely safe, and after doing some math, 3 servings adds up to 2,100 calories. I advise not drinking all those scoops in one sitting. Think about drinking 9 scoops of powder in one cup; now that’ll make for a clumpy mess. Space it out throughout your day, hitting one in the morning, one in the middle of the day, and then maybe one around dinner.

Let’s discuss some of the negative aspects that BSN’s True Mass Gainer has in store. When there’s good, most of the time, there is bad in protein powders. Thankfully, I only have one con to discuss, even if it could be classified as, in my opinion, a slightly major issue.

The one thing I did find underwhelming of this supplement is the amount of protein per serving. In total, there are about 46 grams of protein per three scoops, which is a little bit when you think about it. The ON mass gainer I mentioned earlier has a total of 50 grams per 2 scoops. If you add another scoop to equal that of the three of BSN, that would be about 75 grams. Why is this such a big deal? Well, fellow consumer of mine, the macronutrient protein is unlike any other. 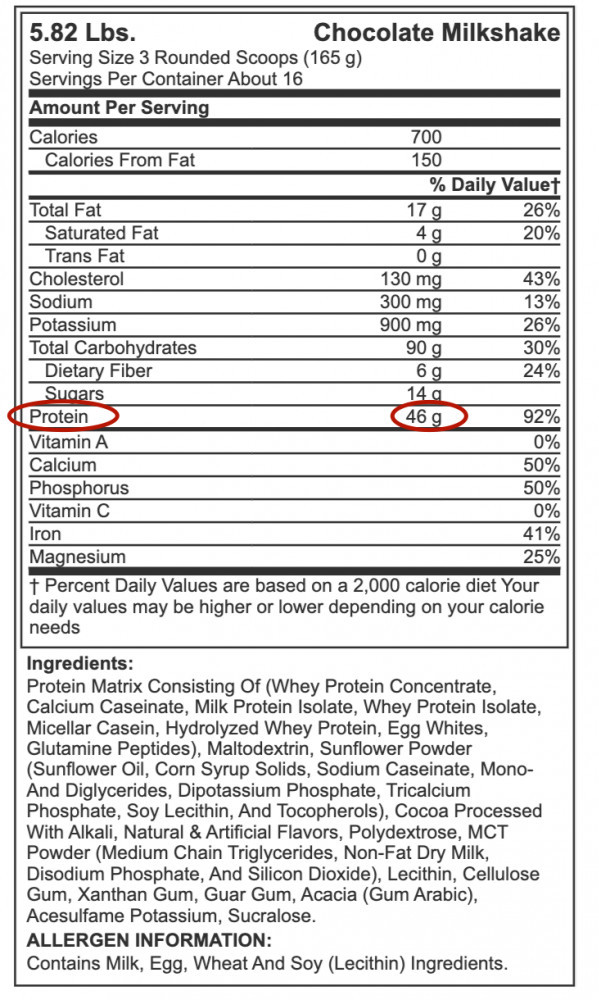 Protein is responsible for many aspects in your body, like creating hormones, neurotransmitters, and supporting your hair/skin growth. Dietary protein has tons of benefits also, like keeping you full, boosting your metabolism, and the most known one, building muscle. It’s crucial for our diets, and we can’t live without it. For a supplement that is meant to provide you with protein, it does a poor job at it. Still a decent amount, but I’d like some more.

In the conclusion of this BSN True Mass Weight Gainer review, it safe to say you got a keeper when buying this powder. It’s fantastic taste and texture offers the consumers a great tasting protein that they’ll keep coming back to. The calories provided is questionable but could be made up for with more scoops. The protein per serving could be better in my opinion, but could also be made up for with more scoops.

Got any questions? Leave them down below, along with questions you may have!