Protein supplements, or supplements in general, are known to be controversial in the fitness industry. A lot of questions are asked, and eyebrows are raised when people mention the consumption of protein powder.

Protein supplements, or supplements in general, are known to be controversial in the fitness industry. A lot of questions are asked, and eyebrows are raised when people mention the consumption of protein powder.

Why is that? Well, not until recently, something devious was found out about protein supplement companies.

It has to do a lot with a lack of enforcement from the Food and Drug Administration, or FDA. This begs the question, are protein powders FDA approved?

Are companies and manufacturers honest about their labeling on protein supplements? Let’s find out.

What Is The FDA?

The agency was created in response to the public outrage at the shockingly unhygienic conditions in which food was being packed and sold.

An all too famous book written by author Upton Sinclair called “The Jungle” vividly portrays these working conditions. He observed the way food was being handled in the Chicago stockyards.

Have a read at this quote from his book talking about the unsanitary conditions,

“This is no fairy story and no joke; the meat will be shoveled into carts and the man who did the shoveling will not trouble to lift out a rat even when he saw one.”

With the FDA being around, horror stories like those rarely exist today.

The Food and Drug Administration not only regulates the sanitary conditions of food but that of also prescription drugs, vaccines for humans, bottled water, cosmetics, tobacco products, and many more.

Their scope of regulatory authority is vast, and they often work in conjunction with other agencies to make sure their job is thorough.

Agencies like the DEA, Drug Enforcement Agency, and USDA, United States Department of Agriculture, work with the FDA to regulate products. 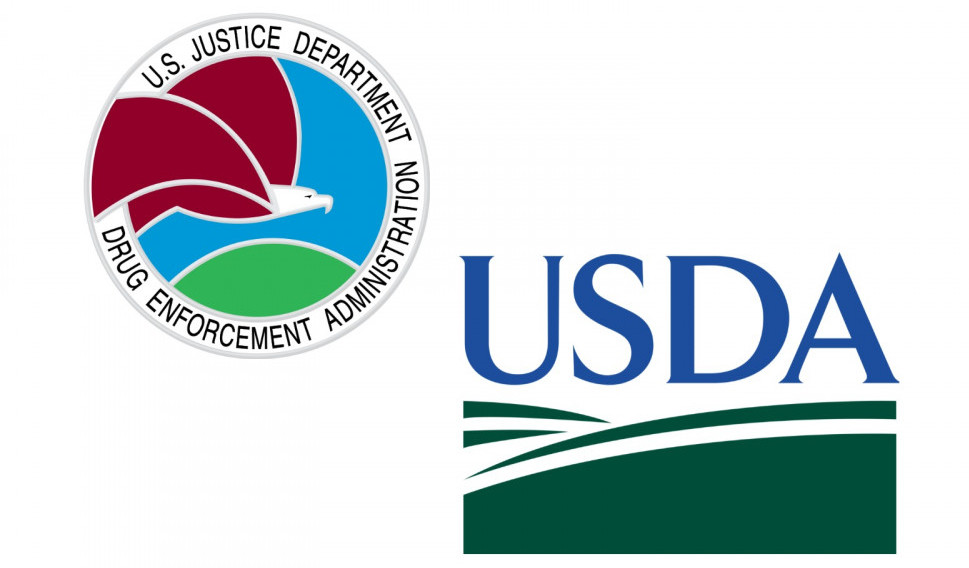 Things do get quite interesting when talking about dietary supplements and the FDA, almost shocking. Keep in mind that this agency does look over prescription drugs before they get exported out for consumer usage.

They have a saying for drugs specifically, “they are considered unsafe until proven safe.” The same thing should go for supplements, right?

Yes, you heard that right. Dietary supplements are treated as “special foods” and not drugs, meaning they aren’t put through the same strict safety requirements.

In 1994, the Dietary Supplement Health and Education Act, or DSHEA, put supplements into their own category.

Wrap your head around that. For that reason, many supplements are made tainted illegally with dangerous substances free to be bought by anyone.

The FDA can only regulate supplements if they are proven to cause evident harm to the consumer, whether it being illness or injury.

However, the problem with this is that most supplements are self-prescribed, so there’s no real system to report bad reactions and side effects.

Doctors may report problems if they prescribe the supplement. Still, the action taken after the discovery is nowhere near as fast as that of a dangerous drug. It could take a while. 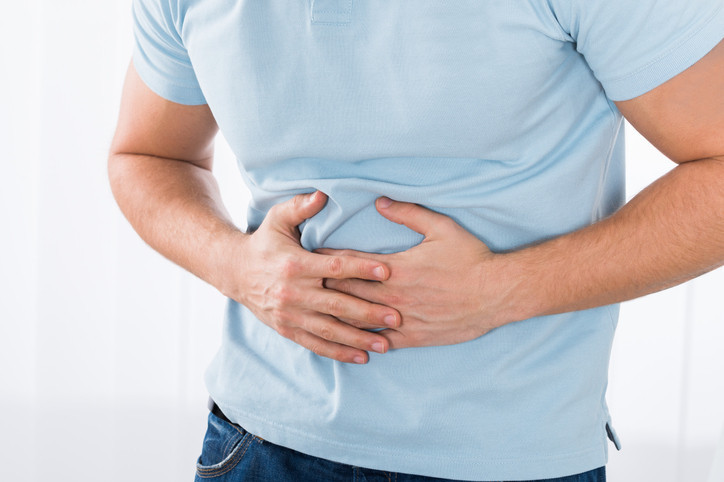 Just to put into perspective of what some companies have been putting in their supplements, let me propose this situation to you.

Let’s say you head to your local supplement shop and decide to try new protein powder.

You look at the label, like I smart individual, and see one or two questions at best ingredients, maybe maltodextrin, or artificial flavoring.

You decide you could probably live with those ingredients in your system. But in reality, the powder possesses way more harmful substances that aren’t even labeled. This is what has been found in some powders over the years,

Some of these you’ve probably never even heard of. I didn’t either before looking into some of them. Arsenic is a known chemical to cause cancer, and DMAA is a drug that puts you in such an intense rush that it may lead to a heart attack.

I don’t know about you, but I don’t want anything like that in my protein powder. Most people are just looking to add more protein in their diets, but are unaware of the list of other things that are inside damaging your body.

Eventually, someone had to stand up for consumers and stop what manufacturers were doing with their products.

A handful of people started a group called “The Clean Label Project,” which decided to check for themselves and expose what protein powder companies were hiding in their products.

They conducted their study in 2018, and much like the section above mentioned, the results were shocking. Here’s a clear-cut infographic of what companies were trying to get away with. 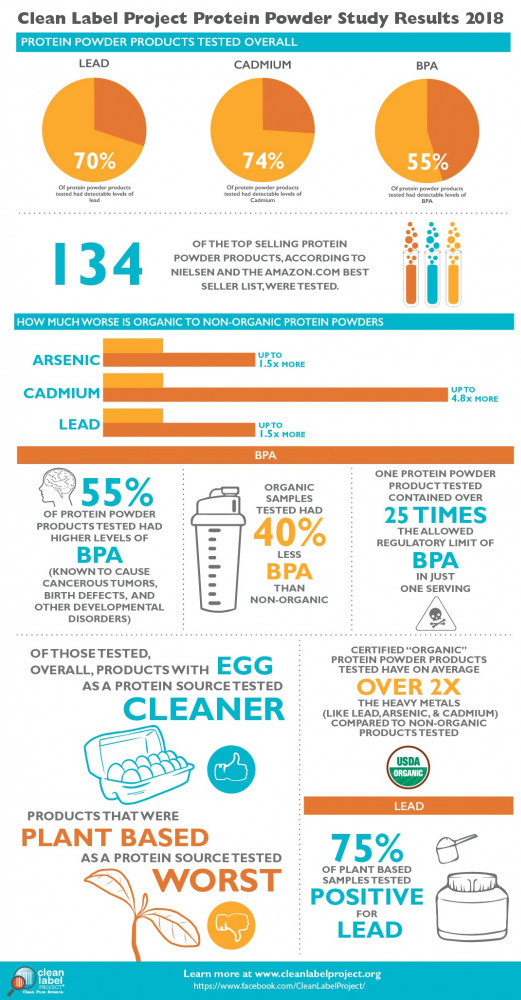 A reoccurring theme going around in protein powders is having the substance lead. Imagine that, drinking lead. Do you know what else lead is used in? Batteries, ammunition, weights for lifting, and belts.

It has shown that consuming lead is highly toxic to the brain and central nervous system, extremely dangerous.

The Clean Label Project also has it out for plant-based protein powders, mainly because they claim to be organic while being far from it.

About 75% of these powders tested positive for lead, that’s insane. Have a good hard look at that infographic for all the information.

So what action has the CLP taken to straighten out protein powder companies?

Well, there aren’t too many things they can do, but the main thing they got going is a petition you can sign to urge the FDA to start tightening up supplement regulation. I’ll leave a link to that here if you’re on board with their actions.

They also have a list of products on their site that have passed their tests and studies to ensure that they can call themselves safe to the public.

What Can You Do To Stay Safe?

It can be hard to start trusting companies with their protein powders after absorbing all that information, but not every company is a snake. Many dietary supplements have spotless safety histories.

Their manufacturers are careful with labeling, claims, and substances they incorporate in their products. However, they keep safe, here are a couple of things you should avoid. Don’t buy a supplement if…

If you hear any of that from anything concerning your protein powder, stay away as far as possible. These were common themes of products that were shown to be lying about ingredients without mentioning the dangerous ones.

Don’t try to reinvent the wheel, do some research, and find the products that are known to be trusted.

Big-name brands like Optimum Nutrition and Bodybuilding.com are giants in the industry, known for their honesty and transparency. I personally use one of their products, click here to check out which one I’m talking about.

In conclusion, are protein powders FDA approved? Not necessarily.

Unless there is clear evidence that the product is shown to cause harm, it’s safe to be sold. Even if harm is proven, the action is taken rarely or slowly. Groups like The Clean Label Project are sticking up for consumers by exposing supplement companies urging the FDA to step up regulations. For you, however, do some research, follow what works, and stay safe.